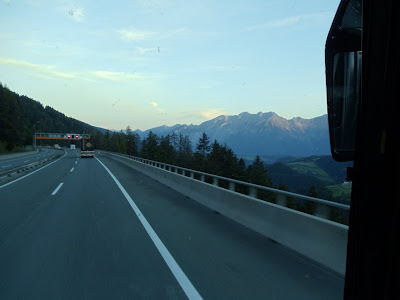 The day starts off with some rain clouds above Rome and the intensity is building up to arriving at Termini for my next stop, Oktoberfest. I’ve turned in my keys to my hostel and having dinner with Colin in the heart of Rome near Vatican City. Rushing into the Metro and off to Termini we go. We meet a large group in front of the Nike Shop. We both check in and wait for the next direction.

We all start to gather following our crew leader, Austin, to the massive busses that await both groups. After putting our luggage on the bottom of the bus it’s time for Oktoberfest. The wait is only 12 hours.

Austin played some flicks from his DVD collection, which were awesome and kept most of us that couldn’t sleep entertained. The crowd in the back of the bus was trying to come up with songs that everyone could sing to, but it was a fail after about 10 attempts.

Took some time to catch some sleep before getting to Munich. On the way there happened to catch the Alps as the sun was just merely coming up. What an awesome sight to see. The hours are now getting less and the bus stop in Austria was met with relief for us due to hunger pains, but a surprise for the workers at the rest stop. Brief eat and drink and then we were off again.

While approaching Munich can’t seem to notice that the city is kind of dead. Hopefully Oktoberfest speaks great volumes.

We arrived at the Stoke Campsite in Munich, about 40 minutes away from the Oktoberfest site, checked in, paid 15 euro for unlimited beer and sangria, assigned a tent, given some necessities (toilet paper looked like gold when I went into the campsite bathrooms), and given some food to pass us by until breakfast. 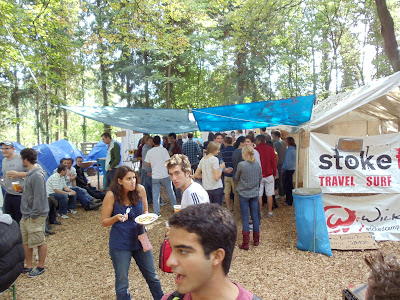