The Stoke Travel guys made awesome eggs and potatoes in the morning and we had to make sure that we didn’t forget our cups for some beer before heading out to the festival. I’m about 8 beers in and ready to head out to the festival. Boarded the bus to Oktoberfest and when in Munich, the bus dropped the group off at a random bus stop. The rush of Americans proceeds to stampede to dozens of tents. Getting into the Leubrau tent was fucking awesome. Got to the festival pretty early and got a table cause the masses would be coming. Ordered a stein and man was this beir fucking good. Began knocking down more steins. Even stood on the bench and finished my beer as the crowd goes wild. Visited a couple of more outrageous tents and even had a half chicken dinner. The chicken was so fucking good and people were buying these things like crazy. 10,000 people at one point under a tent was great. Singing songs like Sweet Caroline, YMCA, and a mix of AC/DC tracks was just epic. Almost time to head back to the campsite and I wanted to check out Munich. At this point it was just me and a friend John cause it’s so easy to lose the group you come with after drinking one stein. Visited a church and prayed, checked out scenery, and got a glimpse of the Munich life. 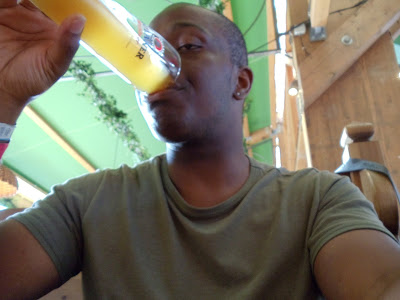 The last tent was supposed to be short so I could go see Wilco, but with no table reserved and thousands inside the tent – a family let John and I sit at their table and the food and drinks started again. The one kid Tim was 16 and just hammered – fucking nuts. He made us stay each time we tried to leave, but finally had to go back to the campsite. Took forever for the bus to come back but finally it came at the original bus stop. This was going to be a trek cause the bus stopped and could no longer accelerate – that meant walking back to the campsite, which was about 30-45 minutes to get back. Got back to the campsite with some other guys, where Colin had already passed out, and began to drink beer after beer through out the night til 3am. Laughed and got to know the Stoke/Bus2Alps staff. Into the wee hours of the morning it was time to go to bed. The rain and hail didn’t make it easy but the beer certainly knocked me out. 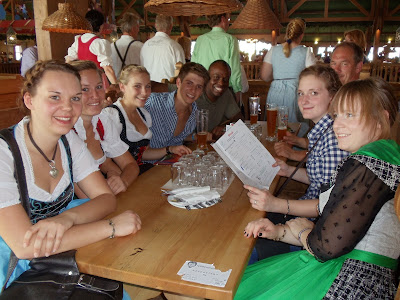