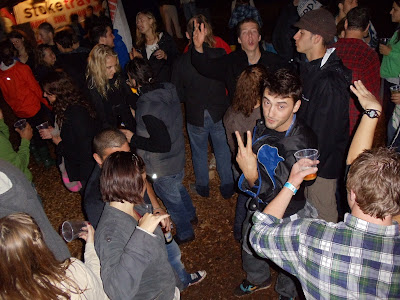 After an exhausting day previously, Saturday was spent with intention to just enjoy the festival and not so much down as many steins the festival. By 8am, the staff of Bus2Alps and Stoke waked most of the camp for breakfast and beer, which after two days seemed rather normal. The bus was filled with eager souls and when Colin, Niko, and I went to the HB tent – the lines were already ridiculous and the breakfast crowds in the tents were kicked out the tent to make way for the busiest day at the festival. There must have been thousands on the streets by mid afternoon. Most of them were Germans and in their lederhosen attire. I didn’t really have much success getting into tents with the crowds, the rain and losing my group. So I went to some local restaurants and grabbed a beer and ate some German dishes, which made absolutely no sense to me; Cheese, pretzel sticks, 3 different meats, horseradish (or it could have been wasabi cause I was crying when I took a big bite, and some mozzarella cheese topped off this one dish. Kind of embarrassed myself in front of some Germans since I didn’t finish most of the meal on the wooden platter and ate it with solely my hands. I was out of it by this point – didn’t really care. Tons of beer gardens were all around the place to grab a stein and walk around the site, so had to get my drink on soon. It was getting about that time to go back to the campsite since there weren’t as many busses being supplied on the day 2 and previously. I made it in minutes before the bus arrived and left suddenly not really waiting for others. Getting back to the campsite couldn’t find my tent mate Colin. It was rather worrisome since it was both our first times in Munich.

I began my regular social clout again as previous days and started having conversations with people from California, Florida, Aussies from Stoke, Indiana, and New York. I’m sure there were more people I made friends with their from other parts of the globe. Music played into the night as the staff joined the company of the group.

Went to the tent early to take a power nap since my body was still in exhaustion of the previous day. Awoke probably at about 4am when most were sleep or drunk as fuck.. The one Italian guy was using the poles from the food tents to hold himself up. He found his way to bed with orange neon paint all over his face, which I guess was from a girl out of her mind earlier just painting people. Had about 4 beers and went to sleep – still no tent mate.