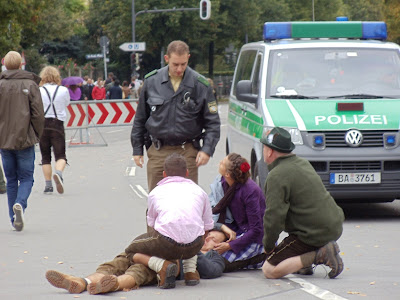 Most of this day was going to just be traveling back to Rome, which was always exciting in a sense. We were set to leave at 1pm and at about 10a started to get worried cause Colin still hadn’t made his way back. I thought about going to the festival to look for him, but I would’ve probably missed the bus since it was via public transportation. After losing my wallet the previous day in the middle of having a beer, paying for it and getting to the 7pm bus on time – money wasn’t there and hunger couldn’t take beer and eggs that morning. Decided to walk about 10 minutes out and grab some KFC and try to think what I was going to do about Colin. I already packed his things so if worst came to worst it wasn’t left at the campsite. Half way through my trek across the bridge was someone walking in the opposite direction. I paused and was shocked to see it was Colin. After losing him for 30 hours it was great to see him in one peace. His day was filled with drunkenness, exploring Munich, a nightclub, the bar, sex, hostel and 2 hour walk back to the campsite. We went and had lunch at KFC with the small cash we had. KFC’s looks are more like restaurants with flat screen TV’s and a very family oriented atmosphere.

Headed back to the campsite to get a little trashed before going back to Rome. About four beer bongs in I grabbed my bag and headed to the bus. The guys at Stoke gave me a gift of 1.5L of Sangria. This was fucking delicious on the way back and made up for losing my wallet (kinda). On the road again with DVD’s playing for the next couple hours. 1 person puked in the back, which was bound to happen. Austin got that situation under control rather quickly so people weren’t to grossed out.

Almost back in Rome and the weekend is coming to a close. Austin thanked us for joining him and Bus2Alps for a great trip and told us about some upcoming trips which I will definitely do in the future as long as time and money permits.